A Mindfulness Journey to Bhutan 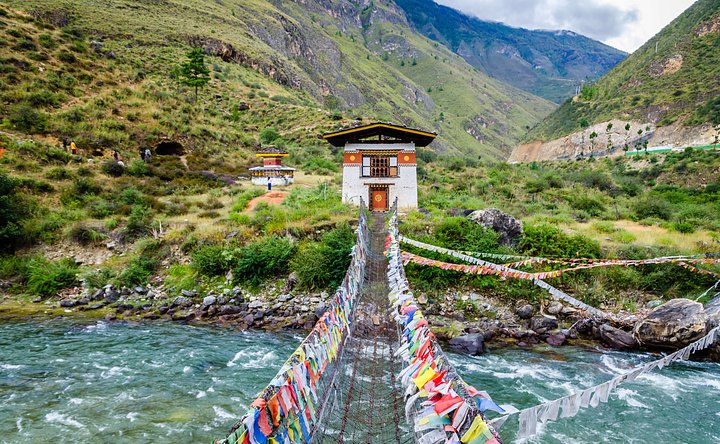 The fragrant perfumed Kingdom of Bhutan is considered The Last Shangri La on Earth. It’s an ancient empire secluded high in the Himalayas with mesmerizing natural beauty, no traffic, no pollution, 71% covered by forest with a rich, unique heritage centered around the Tibetan style of Buddhism. Bhutan is a true spiritual haven where one can discover a slice of inner peace. It is actually a very difficult country to get into, which is why we are working with the royal family to set up the best possible trip just for you. An experience you’ll never forget *While the schedule of the Paro Tschuchu festival hasn’t yet been set for 2023 it is normally held at the end of March so we’ll do everything possible to incorporate this festival as described currently on the first day when possible into our itinerary. 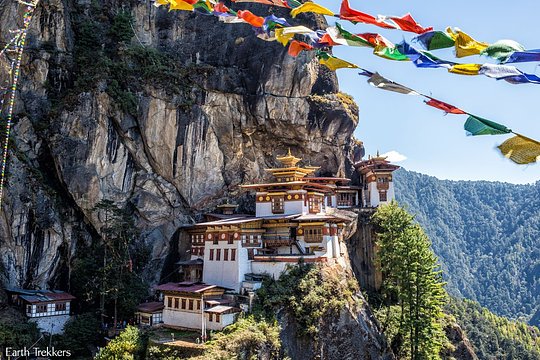 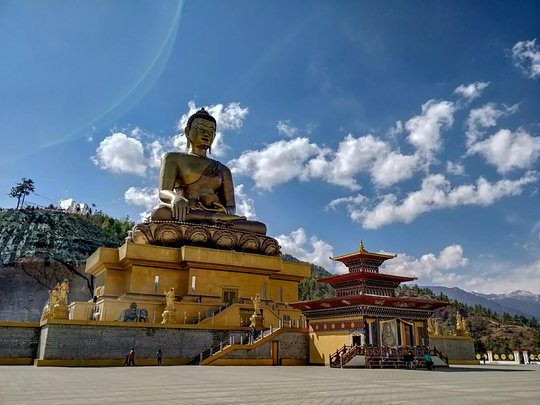 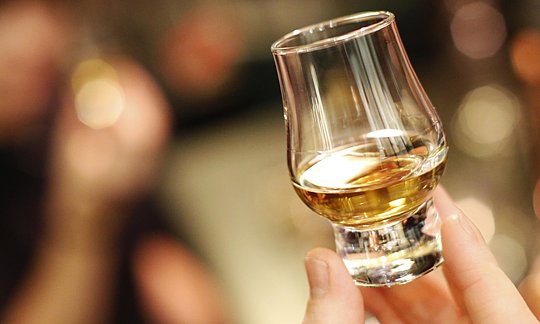 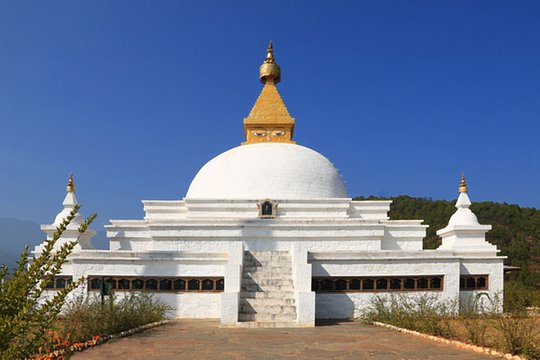 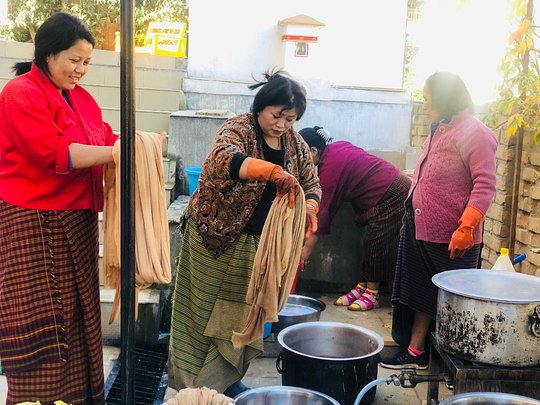 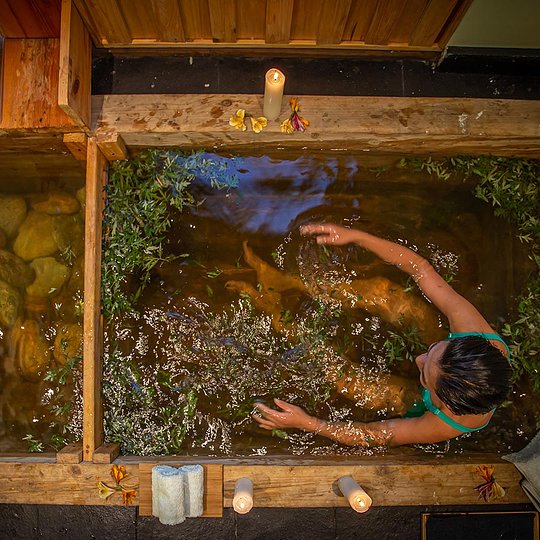 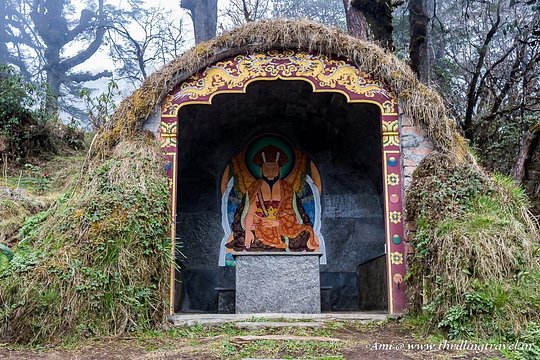 Visit the meditation caves and relish a moment of silence

Stay at the Bhutan Spirit Sanctuary, Bhutan’s only 5-star luxury spa & resort that specializes in offering a ‘wellness-inclusive experience.’

Here's a day-by-day itinerary of the trip 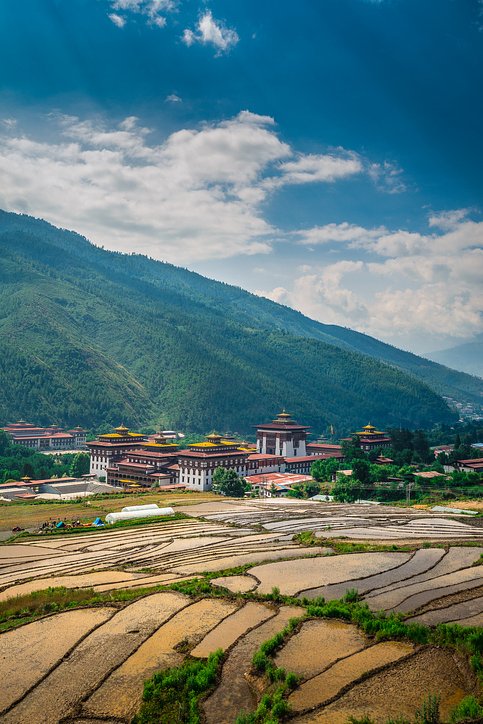 Today we will drive an hour to the capital city, Thimphu where we’ll do some kira shopping at one of our favorite local design shops, Kelzang Textiles. The kira is Bhutan’s traditional attire worn by women.Historically they’re woven by hand in intricate patterns. Kelzang still creates these one-of-a-kind pieces herself with the help of her two daughters. The family will warmly assist you in finding something just right for you. (The kira purchase is included in your trip cost).

Rest and freshen up, dinner will be at 7pm at the hotel. 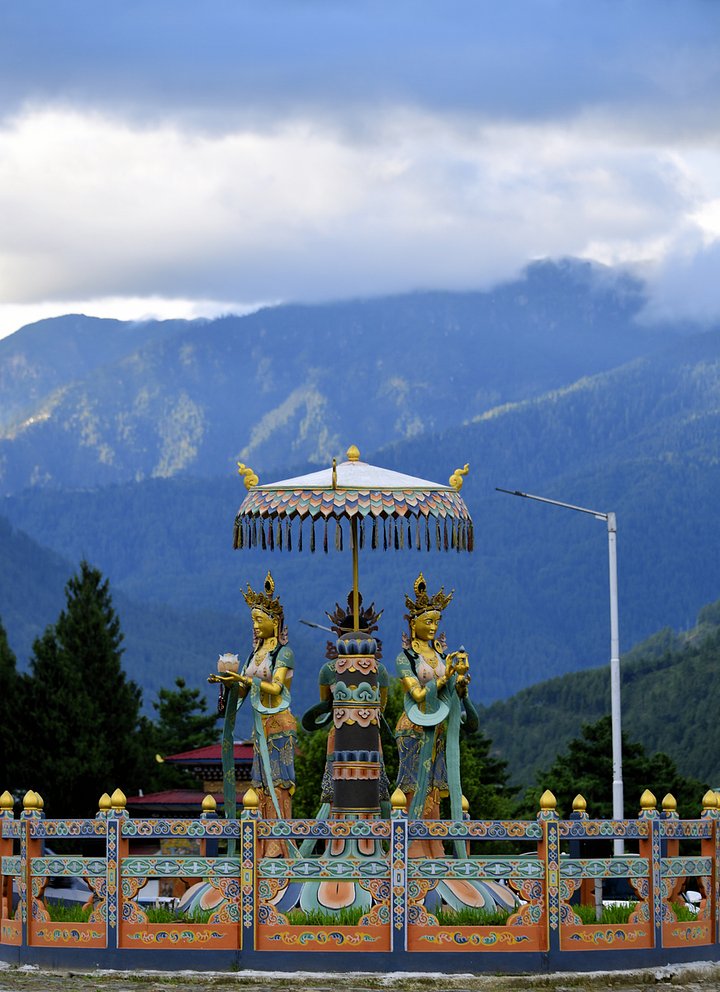 After breakfast at our hotel we’ll drive to visit Zorig Chusum, the Traditional Arts College. The school provides up to 6 years worth of instruction in Bhutan’s 13 Traditional Arts. Students specialize in painting, woodcarving, embroidery, clay statue making and much more. Here we’ll have the opportunity to watch while they create and learn how the various crafts are made, later if you wish you can purchase their crafts in the shop on the premises.

Later we’ll head over to meet retired Lt. Colonel Kesang Choden at her home. Her mission is to preserve and promote the Bhutanese food culture.

Trained in the prestigious Indian Police Service (IPS) in Hyderabad, India, she served the Royal Bhutan Police for 23 years as one of the first two women Police officers in Bhutan.

She developed her culinary skills to become a self-taught chef with decades of experience and now specializes in organic Bhutanese cuisine and food culture. She’ll be our instructor in a cooking lesson outside on a traditional Bhutanese stove using all local and organic ingredients. After our hands-on class we’ll dine on the delicious meal we’ve just made.

This afternoon you will have the option to either rest at the hotel or explore more of Thimphu town by visiting the National Memorial Chorten a prominent landmark in the city with its golden spires and bells or perhaps observe an archery demonstration, one of the nation’s most popular sports.

In the evening, we’ll dine on organic vegetables from the garden as well as meat sourced from New Zealand at our hotel with Ms. Kuenga Wangmo, Bhutan’s Only Archaeologist. Ms Wangmo is quite accomplished as a National Geographic explorer with her doctorate degree from Cambridge. 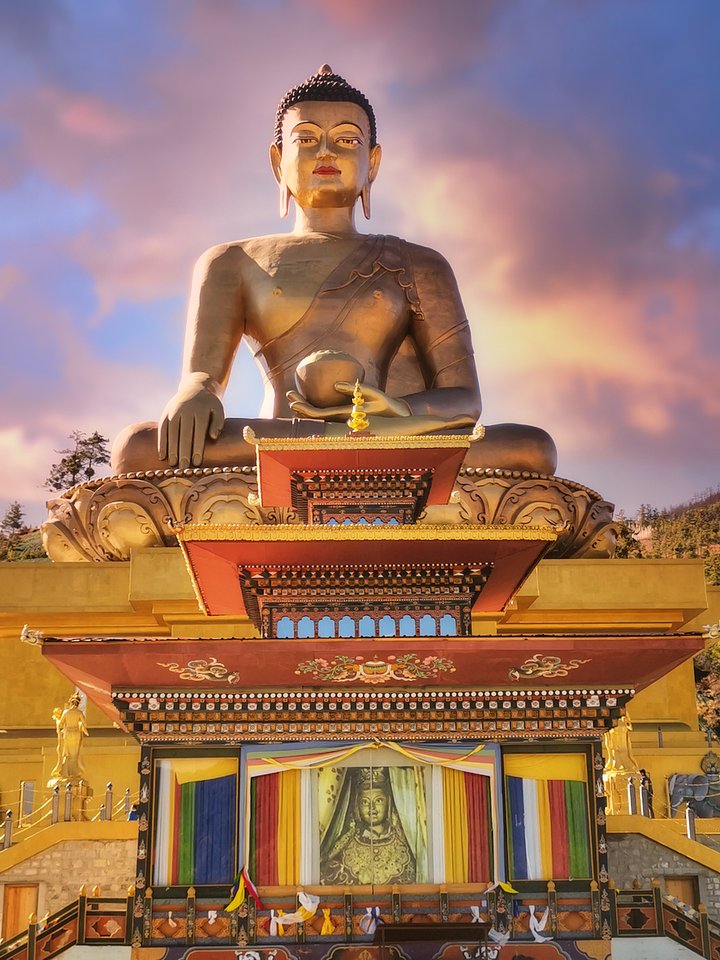 Today after breakfast, we’ll check out of Zhiwaling Ascent and drive to visit Asia’s tallest Buddha Dordenma Statue which sits high up on a mountain with beautiful views of the capital city before we head to Punakha.

Today we’ll savor a picnic lunch with members of BAOWE (Bhutan Association of Women Entrepreneurs), an association that works towards developing a socially conscious driven private sector by promoting women entrepreneurs at the grassroots level. Their work contributes to poverty reduction by enabling women to be self-reliant by operating businesses from a GNH (Gross National Happiness) perspective.

After lunch we’ll drive up to Punakha (2 hours) making a stop at the Dochula Pass (3100m – over 10,000 feet) to enjoy the spectacular views of the Northern Himalayan Mountain Ranges. Here we’ll take a stroll around the 108 stupas (a a dome-shaped structure erected as a Buddhist shrine) and visit the Druk Wangyal Lhakhang monastery known for its modern paintings and its perpetually lit, gold butter lamp dedicated to His Majesty the Fourth King.

Later on today we’ll have the opportunity to visit the Sangchhen Dorji Lhuendrup Nunnery. The nunnery houses a spiritual learning and meditation center. Apart from religious training, the nunnery provides life skills training, such as tailoring, statue making and traditional paintings. We’ll be welcomed into the prayer room to join the nuns where we’ll part in their evening prayer ceremony. This is an ideal time to wear our kiras. This unique opportunity is not afforded to most visitors.

As the sun sets we’ll check into our lovely boutique resort in Punakha where we can rest and relax before dinning together at the hotel around 7pm. 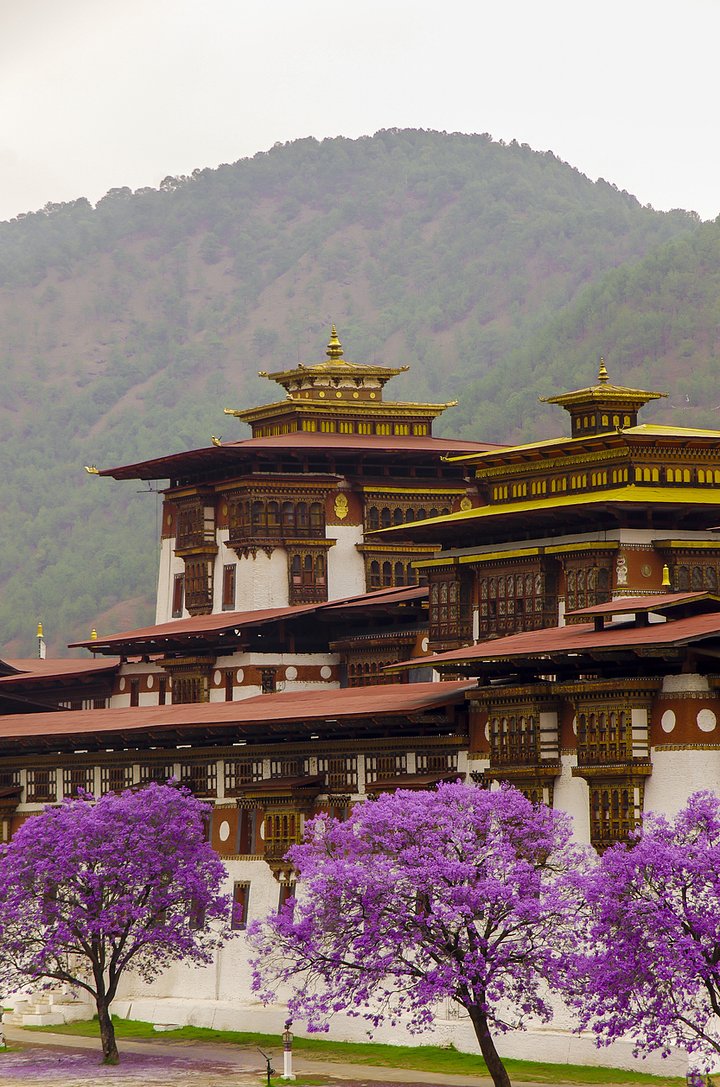 Today we’ll visit the historic Punakha Dzong, known as the palace of great happiness or bliss. It was built in 1637-38 and is the second oldest and second largest dzong (fortress) in Bhutan and the former capital building. The dzong houses the sacred remains of Zhabdrung Ngawang Namgyal, the founder of Bhutan. It is located in the heart of the valley at the confluence of the Pho Chhu (male river) and Mo Chhu (female river). The Central Monastic Body spends their winters here.

We’ll walk Bhutan’s longest Suspension Bridge and then drive to the Happiness Field Valley Farm Home for lunch. This is a charming family farm home that stands out for several reasons. The farm home’s stone clad walls, black wooden frames and smoke covered kitchen walls gives it a beautiful yet rustic feel. Your host, Ms. Aum Karma Yangchen, is a very experienced designer and weaver. She designed the 5th King’s Coronation Gho (traditional Bhutanese attire for men). Spend the afternoon witnessing a Traditional Dyeing demonstration while enjoying a wonderful meal that she’s prepared. She makes some of the best hearty, home-made food in the whole nation!

After lunch, you may enjoy walking through her property; which is a peaceful mix of farmland, forests and rivers.

Drive back to our hotel where we’ll enjoy dinner at our hotel. 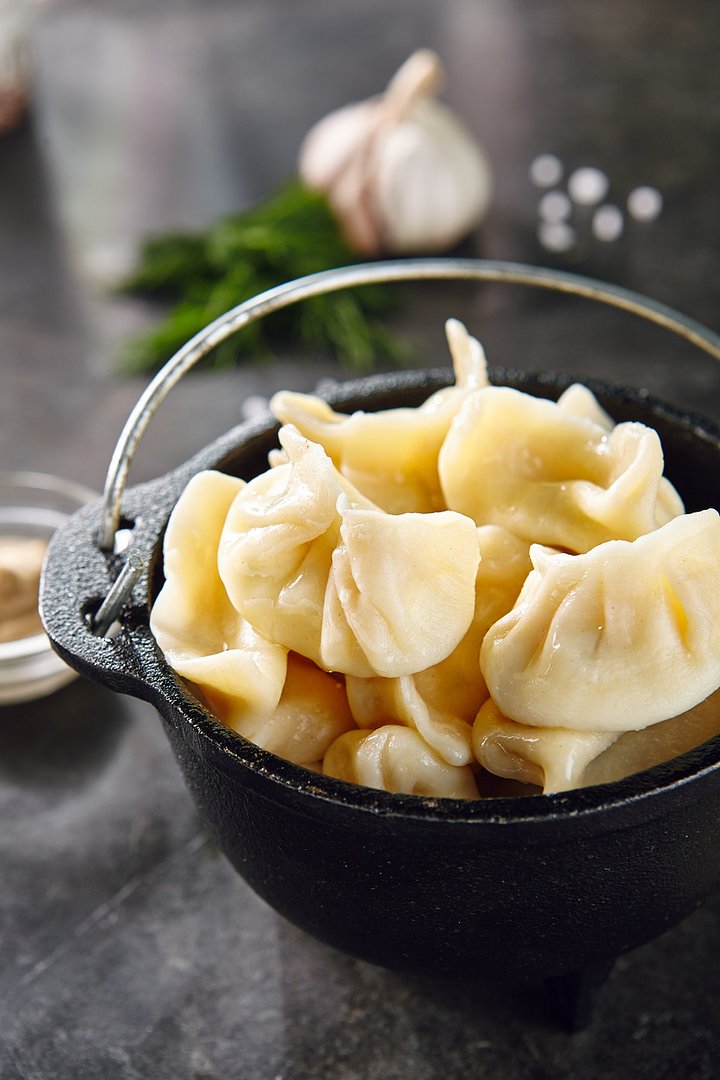 Haa is the last (and final) district to open to tourism back in 2002. During the pre-Buddhist era, Haa was known for its animist tradition dating back 700 years or more. Then inhabitants were encouraged to make animal sacrifices and offer their blood to their local deity. Traces of this belief system are still noticeable in the form of festivals and rituals.

Today we’ll visit Ugyen & Doley’s Farm Home for lunch. We’ll be welcomed by our hosts, Ugyen and Doley (husband and wife) who will serve us warm traditional butter tea in their spacious Bukhari room.  At their home we’ll try the local specialty “Hoentay” (buckwheat dumplings) with spinach and cheese fillings.

After enjoying our meal together we’ll have the unique pleasure of taking part in a hot stone bath in the traditional style.

Later this afternoon we’ll drive to our luxury glamping site to enjoy a starry night in the quietude and beauty of the mountainous countryside. The interiors of our luxury tents are made cozy by traditional Bhutanese decor including; yak blankets, handmade bedspreads and Bhutanese rugs. It is the only outdoor accommodation in the Kingdom uses only renewable energies (solar and lithium) to power the campsite and does not use disposable plastics.

After settling in, we’ll witness sacred songs and dances, and we’ll enjoy a delicious dinner around a bonfire. Here we’ll also have the pleasure of sampling several varieties of Bhutanese Whiskies. All whiskey produced in Bhutan belongs to a project initiated by the 4th King. There is great care taken in producing these local spirits. 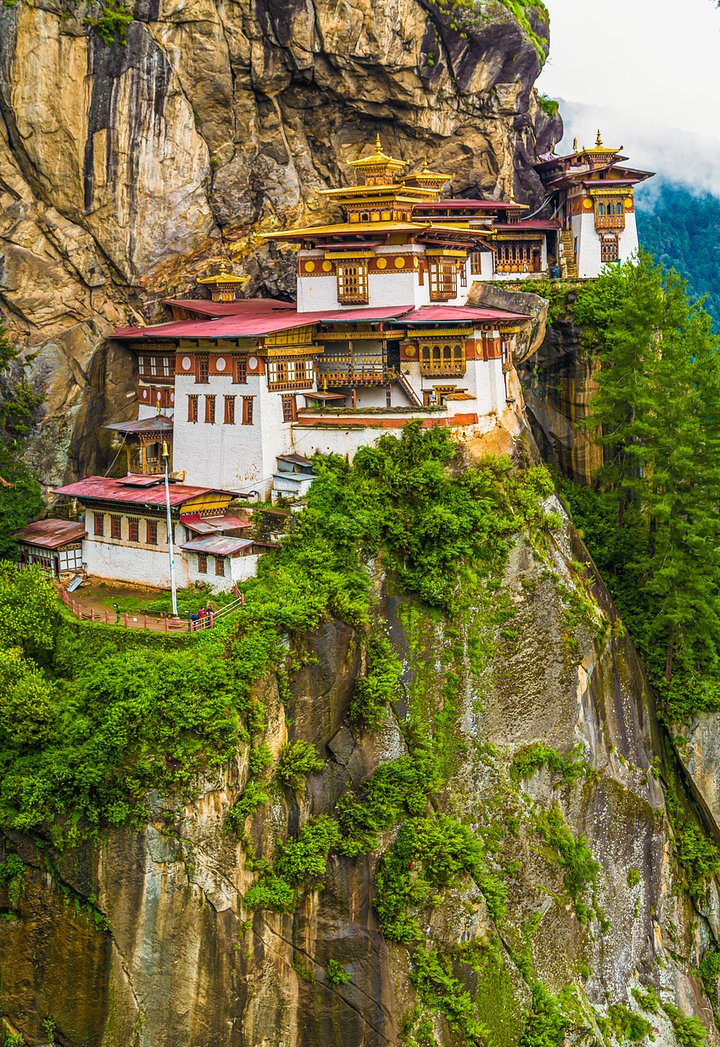 After breakfast we’ll drive 2 hours back to Paro. Today we’ll hike to the famous Tiger’s Nest Monastery which clings to a cliff at 3120m above sea level (over 10,250 feet) This is the penultimate experience in Bhutan. For those unable to hike the 5 hours roundtrip there is a place to sit and relax about half-way and enjoy the view as well as refreshments.

Upon arrival we’ll visit the cave where the tigress slept and practice meditation at one of the four main temples with the resident monks, something the general public doesn’t get to do. After this special experience we’ll enjoy a picnic outside the monastery.

After arriving and checking into the hotel, we’ll meet with a traditional medicine expert. Bhutan was once called the ‘Land of Herbal Medicine’. Our expert is one of the best in the country and will offer each of us a consultation including recommending diets and treatments. You will then be able to enjoy one of these treatments (included) feeling refreshed and restored after.

Tonight – a celebratory farewell meal will be held outside at the Bhutan Spirit Sanctuary, overlooking the Neyphu Valley. After dinner we’ll enjoy a bonfire and beverages under the stars. 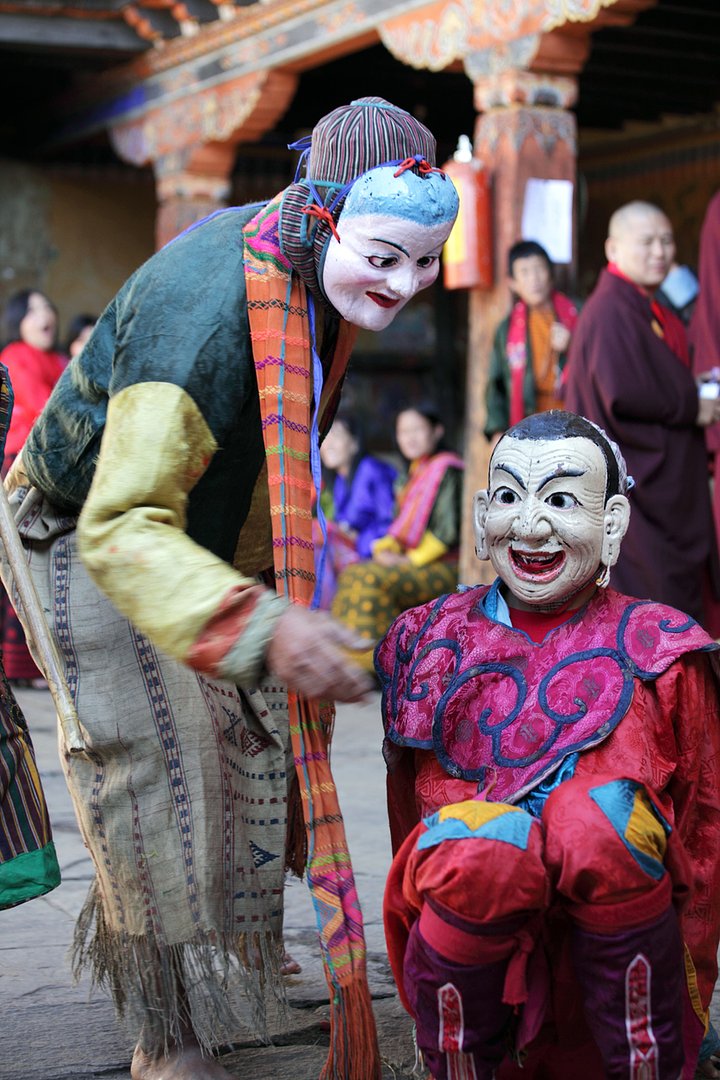 After breakfast together we’ll drive you back to the airport to catch your flight home. For those who would like to continue on, see below for add on experiences in Bhutan.

Post trip Excursions can be made available to a few or the entire group depending on individual desires. Possible ad-ons excursion for an extra price include:

Bumthang is considered the heart of spiritual Bhutan with stunning natural beauty. Some of Bhutan’s oldest and most venerated temples are found here. (by air)

Everyone gets their own fabulous room! 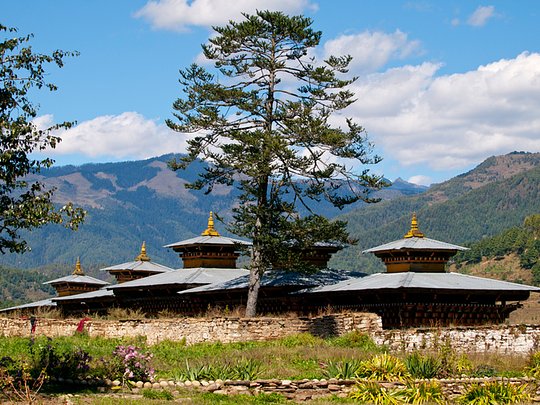 Explore the Beautiful Fields and Valleys of Bumthang

A small, landlocked country nestled deep in the Himalayas between India and China, Bhutan is characterized by steep mountains and deep valleys, which led to scattered population settlement patterns. The country is known for its unique philosophy – Gross National Happiness (GNH) – which guides its development strategy.

Everything stated in itinerary above including all meals + wine with dinner

All guides and tastings

Consultation and one treatment at the spa

Museums and all entry fees

All luxury accommodations (including glamping)

A kira hand picked out by you! (classic bhutanese attire)

Entry and experience the Paro festival

Any additional Spa Treatments as desired

Any personal souvenirs or purchases

Gratuities for the guide

Additional wine, beer or spirits beyond what is offered 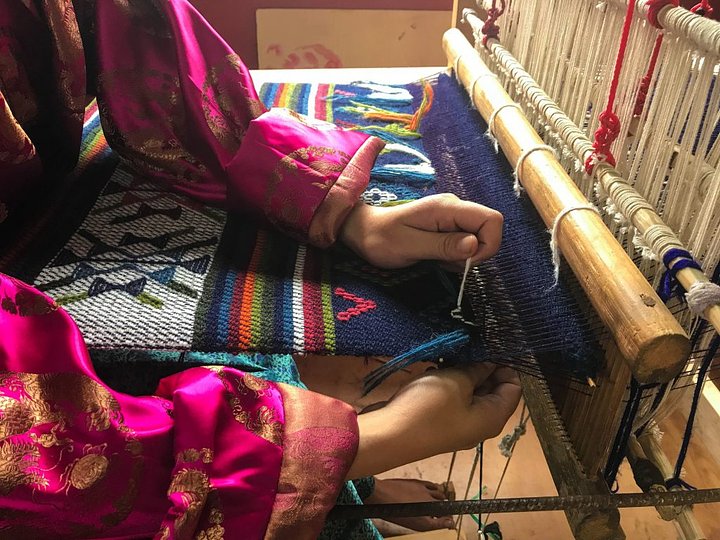 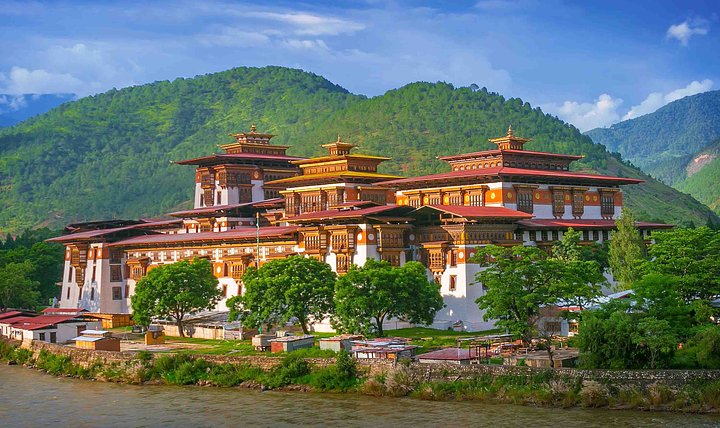 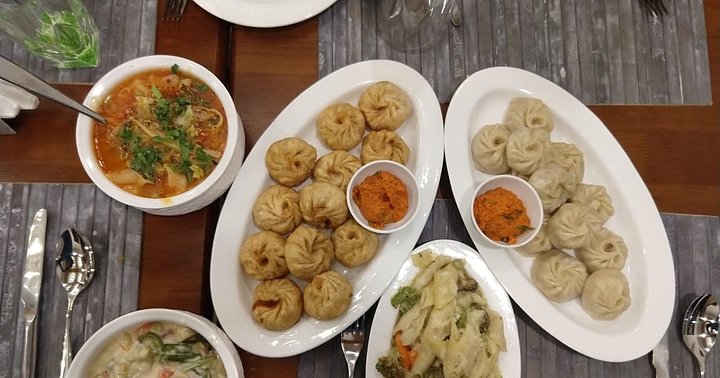 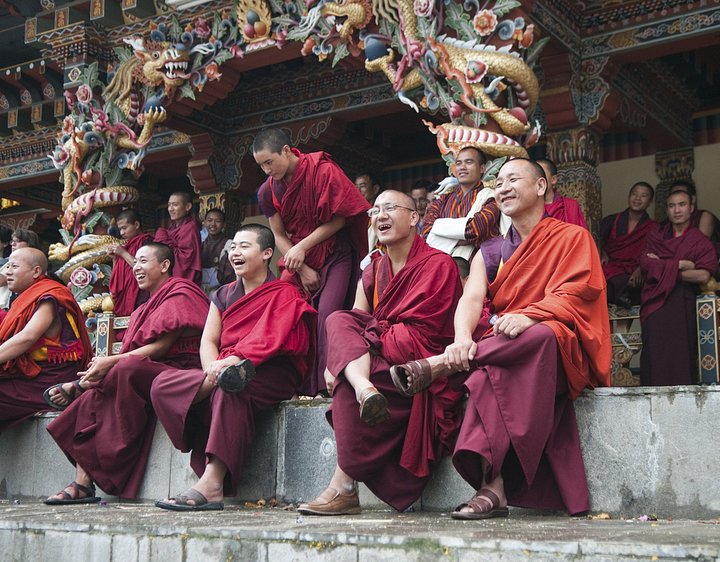 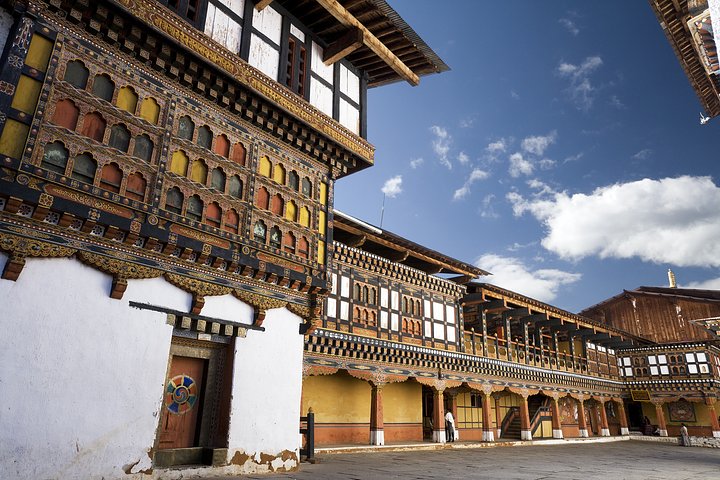 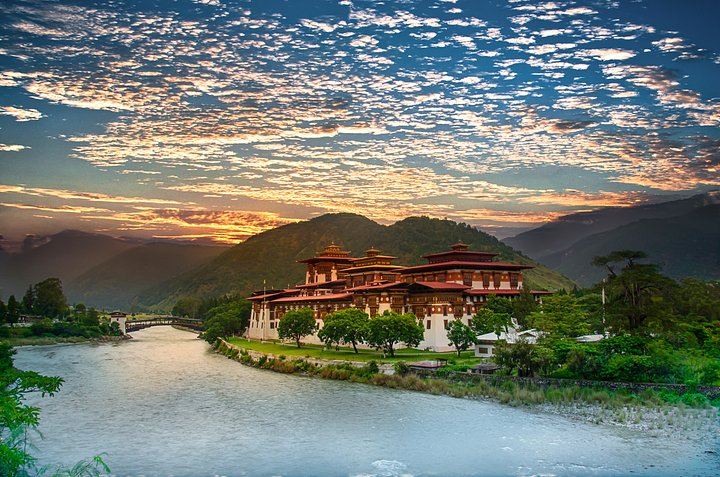 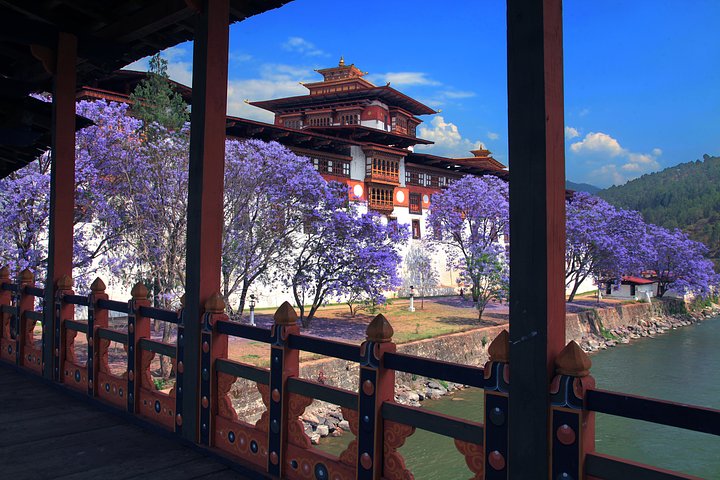 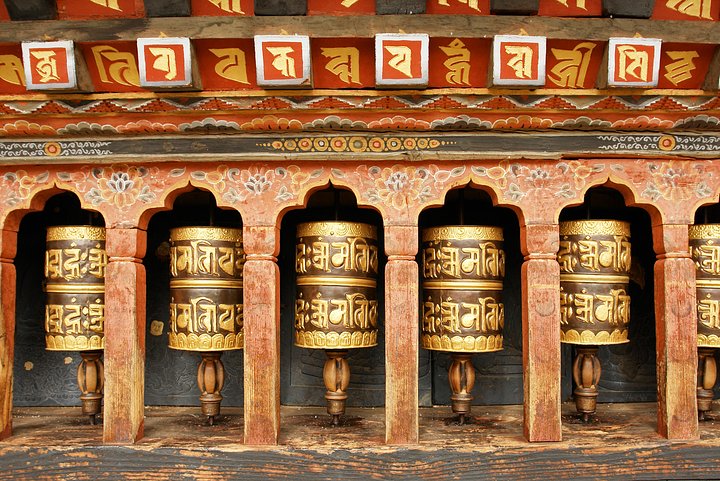 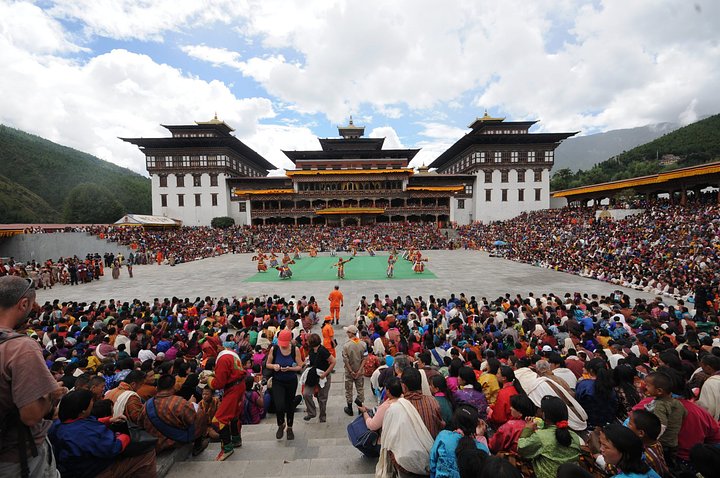 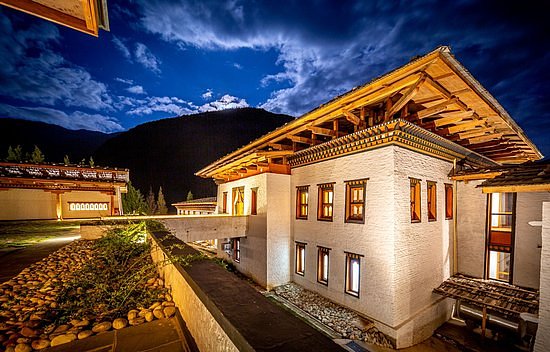 Who is the trip guide?

Doni, Girls’ Guide to Paris & Beyond’s founder will be your host. Our licensed guide in Bhutan will be Ms. Deki Wagmo who works closely with our ground partners. She explains: “I chose to work in this field because I have always had an interest in adventure, travel, art, history and culture. I decided to make my interests my work by choosing tour guiding as my career. I also love meeting people from different walks of life and learning new things with each experience.”

What airport should I fly into?

What will the weather be like at this time?

The weather in Bhutan this itme of year is generally perfect.

It is a moderate rainy time with an average rainfall around 59mm (2.3inch) in Thimphu.

What should I pack?

We will have a zoom call about 6 weeks before the trip starts to discuss all that information and give you a packing list Here is a great website that we love that will help you with packing and travel trips.

Inquire about this trip

A Mindfulness Journey to Bhutan